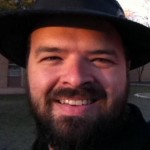 Ben Brumfield is an a partner at Brumfield Labs LLC, a software firm specializing in the digital humanities. In 2005, he began developing one of the first web-based manuscript transcription systems. Released as the open-source tool FromThePage,it has since been used by libraries, museums, and universities to transcribe literary drafts, military diaries, scientific field notes, and punk rock fanzines. Ben has been covering crowdsourced transcription technologies on his blog since 2007.

In addition to crowdsourcing for public history, Brumfield Labs has collaborated with scholars on digital scholarly edition projects including the Digital Austin Papers and the Civil War Governors of Kentucky Digital Documentary Edition.